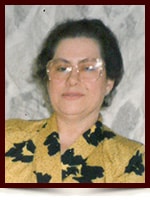 On December 21, 2014 Mrs. Maria Vale of Edmonton passed away peacefully at the age of 81 years.

Left to cherish her memory is her loving daughter Angie (Jose); two grandchildren: Brian (Jen) and Joseph; her sister Maria Do Carmo, her sister-in-law Maria da Luz as well as numerous nieces, nephews and many dear friends. She was predeceased by her husband Antonio in 1999 and her brother Artur.