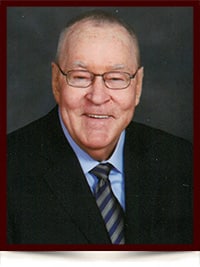 Born in Kitchener Ontario, the youngest of six, Andy joined the army at age 15, the Military Police in 1950, and was a Korean War veteran. Andy met Denise in 1957 while stationed in Antwerp, Belgium; they married in Belgium and raised 4 children in Germany, Victoria, Vancouver and Edmonton.  Andy retired with rank of Lieutenant in 1974 to embark on a new career as the first Department Chair, Law Enforcement and Corrections at Grant MacEwan College, 1974-1997. Andy completed his B.Ed and M. Ed during this time, fulfilling a long held belief of lifelong learning.

An avid golfer, Andy also enjoyed traveling throughout North America with Denise, as a member of the Police Educators Board of Canada. A devout Catholic, Andy served St. Matthews parish as a reader and RCIA teacher, and was a member of the Third Order of Saint Francis.

The family extends heartfelt thanks to all the dedicated staff at Kipnes Centre for Veterans who cared for Andy during his residence there.