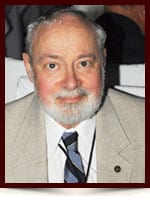 It is with much sorrow Edʼs family announces his passing.

Ed was gifted academically and had an incredible work ethic. He spent most of his working career in the Oil and Gas Industry working his way up to Director of the pipeline for the entire Northern Region of Argentina. He retired in 2001 and enjoyed life to the fullest for those 15 years of retirement. He was an avid reader and music lover. After their marriage in 2010, Ed and Penny traveled to many countries and enjoyed local theatre, music and dining.It goes without saying that his favorite moments were when he was surrounded by his family and friends.

Ed was predeceased by his father, Hector Euclid Boulay in 1969 and his mother, Marie Therese (Terry) St-Hilaire in 2005.

In keeping with Edʼs wishes, an informal gathering of family and friends will be held on Sunday, June 12th at 2:00 p.m. at Trinity Funeral Home located at 10530-116 Street. Please come prepared to share your memories of Ed.

Edʼs kindness was worldwide. He sponsored many children through World Vision to give them a better life.In lieu of flowers, donations may be made to World Vision International or a charity of your choice.