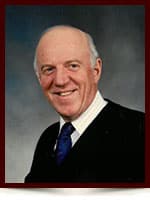 It is with great sadness that we announce the passing of this wonderful man.  Jerry was a devoted husband to Vina for 51 years, a dedicated father to Danelle   (David); Derek (Kirsten); and Daena (Todd) and a loving grandpa to his cherished grandchildren: Devin & Dani; Nathan & Adam; and twins Bennett & Jaxon.
Jerry was also a brother, an uncle, a friend, a mentor and a confidante. He loved to dance and to laugh - he had a great sense of humour and could tell a story like no other. He enjoyed coaching hockey, sporting events, fishing, camping and spending time in Cadomin with family and friends. Jerry’s four legged friends were also an important part of his life.

Jerry was a gifted businessman and began his career at Shaben & Hamdon in 1960. Through hard work, dedication and a keen mind, he was promoted through the ranks, achieved his goal, and became President of Shaben International. He was a respected leader and was always there to give support and sound advice. He was interested in finance and world events but most of all, the well being of those he loved. He faced each day of his life with class and grace. He did it his way.  Jerry is also survived by his sister Marilyn, brothers Harvey and Archie and numerous family and friends.  He was predeceased by his parents Alex & Mary, sister Martha and brothers Bert and Walter.

A private celebration of Jerry’s life will be held with close family and friends.
Memorial donations in his honour may be made online to Humane Animal Rescue Team (HART) or to North West Edmonton Seniors Society, 12963 - 120 Street, Edmonton, T5E 5N8