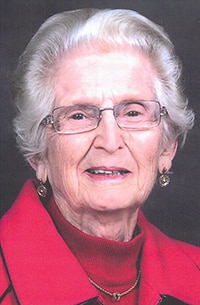 It is with deep sadness that we announce the passing of a very dear mother, grandmother and great-grandmother, Myrtle Selma Thorsley (née Killian) on Sunday October the 6th at the age of 99. She was predeceased by her husband Alfred James (Jim), her son Robert and her daughter Patricia. She leaves behind her daughter Janice (Ernest) Nowlin and son Douglas (Janet) Thorsley, her grandchildren Jeff (Kirsten) Nowlin, Jill Nowlin, Mark (Susie) Thorsley, Ryan (Natalie) Thorsley and Kristin Thorsley, and her great grandsons Brayden, Tyler and Finn Thorsley.

Myrtle was born in Ryley, Alberta on May 15, 1920. She was the only child of Martin and Anna Killian. Growing up in Ryley, Myrtle enjoyed listening to country music but most of all, riding her horse. She took great pride in being able to beat many (if not all) of the local boys on her horse, Maude.

On February 14, 1941, she met her husband Jim while working as a switchboard operator in Riley.  Even in her final years, she would still fondly tell stories about their initial meetings and the many excuses Jim had to pay a visit to the switchboard while she was working. She married Jim on December 23, 1941, and moved to Edmonton shortly after.

After losing her husband in 1985, Myrtle continued to live alone in her house until the age of 94.  Mrs T., as she was affectionately known locally in Belgravia, let nothing hold her down in her 30 years of living by herself.  She could be found with power tools and tall ladders, maintaining her impeccable house and yard. She spent countless hours in her vegetable and fruit garden, ensuring her grandkids were stuffed to the brim with raspberries. Although, Myrtle never learned to drive, she was an avid bus rider on her habitual trips across the city to meet with friends as well as to defend her 5-pin bowling championship. Myrtle was also a devout attendee of St. Paul’s United Church.

In her 90th year, Myrtle was diagnosed with thyroid cancer, which “the tough old cookie” beat. Although her voice may have altered, her strength and courage never wavered. She amazed family and friends that same year by jumping up on the saddle again and reliving her joy of horseback riding. Age did not keep Myrtle down.

The entire family is thankful to the many friends who helped spend time and fill Myrtle’s many days with love and companionship. Special thanks to Myrtle’s special angel and friend Pat Loree.  Thanks to the staff at Revera Riverbend and their Angels Cindy and Maribel and to the staff at Benevolence Care Centre for their compassionate care.

Donations can be made to St. Paul’s Quilters or St. Paul’s Hearing Loop of Edmonton.