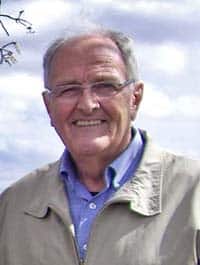 Nick Van Zyderveld of Three Hills Alberta passed away peacefully on Monday April 1 2019 and is now rejoicing in the presence of Jesus his Lord and Savior.

Nick was born in Zaltbommel, the Netherlands on March 29 1932 to Hendrik and Lena (Berkhout) Van Zyderveld, the 4 of 5 children.

Nick emigrated to Canada where he met his beloved wife Tiria Weizenbach in Edmonton Alberta. They were married on July 26 1956 and had seven children. They were married for 38 adventurous years when Tina passed away suddenly on October 31,1994

Besides his dear wife Tina and his parents, Nick was predeceased by his 4 siblings and his lovely granddaughter Meagan Kirstein.

A public visitation will be held at Trinity Funeral Home 10530 116 Street, Edmonton Alberta on Friday April 12   from  10:00 AM to 12:00 PM, with an interment immediately  to follow at Northern Lights Cemetery 15203 Campbell Rd NW, Edmonton, AB