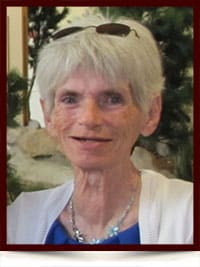 Sharon Sweeney (nee Reid), a long-time resident of Edmonton, passed away unexpectedly on December 19th 2016 at her home.

Sharon was born in Walkerton, Ontario and grew up in the Tiverton and Kincardine areas. She received her Registered Nursing degree from Royal Victoria Regional School of Nursing in Barrie in September of 1970.

Sharon began her nursing career in Barrie before moving to Edmonton, where she worked as a Registered Nurse at the Misericordia Community Hospital for over 20 years. After retirement she dedicated 3 years in Inuvik working in a rehabilitation clinic. She later received a Long Service Award for more than 30 years of professional nursing service.

In her free time, Sharon enjoyed cross stitching, reading a good book and gathering with family. Sharon was the voice of reason for many; and when needed, very sharp and wise advice was always available.

Predeceased by her parents John and Bernice Reid, and aunt Ellen Colwell.

In lieu of flowers, memorial donations made to the Heart and Stroke Foundation would be appreciated as expressions of sympathy.