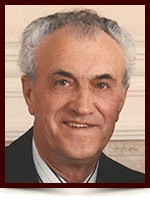 Surrounded by his loving family, Adam Megley entered into eternal rest on Thursday April 25, 2013 at the age of 93 years.

Adam was a hard working man. Beginning at the age of 14 he worked the land, he then served his country and at the age of 40 he mastered the welding trade. He was very creative and especially enjoyed working with wood and wrought iron. Adam was passionate about travel, nature and all kinds of animals. Especially his beloved cat Mittens.