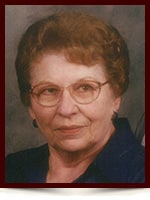 She is deeply loved by her husband of 62 years, Frank, by her daughters Sharon (Rob Swyrd), Lori (Scott Spurway), and by her son Terry (Geoff Reiher). She was a loving and devoted grandmother to Mindy (Ryan Skoreyko), Carly (Max Legault), Chris (Suzie Swyrd), and Ethan Spurway, and great-grandmother to Sienna Legault, and Carter and Claira Swyrd. She was predeceased by her daughter Carol (Jim Breen).

Anne is survived by four sisters, Mary, Ena, Lena, and Lovey, and by her brother Mike. She was predeceased by her parents Kuzma and Anastasia Dudey, by her sisters Pauline, Nettie, and Helen, and by her brother Peter. She is also remembered by her many good friends and extended family.

Anne was born on a farm in Kuroki, Saskatchewan on July 14, 1932. At the age of 18, she moved to Winnipeg where she worked at Canada Packers. It was during this time that she met her future roommate Helen Rogocki, who would also become her sister- in-law. Anne and Frank were married on September 25, 1954 and moved to Edmonton shortly thereafter, a city that would become their permanent home.

Anne always loved the outdoors, especially summers at Ma-Me-0 Beach, at their acreage, and in her garden, and winters at her favourite ice-fishing spots. When in the city, she enjoyed doing crafts, crossword puzzles, playing bingo, and winning at the casino.

Anne will be greatly missed, and will always be remembered for her quick-wit, devotion to family, and generosity.

Anne’s family would like to extend a very special thank you to the 3rd floor staff for their friendship and care during her four year stay at Millwoods Shepherd’s Care Centre.