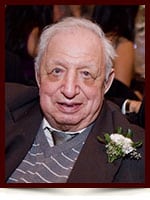 On October 6, 2017 Mr. Antonio Melo of Edmonton passed away peacefully at the age of 91 years.

He was predeceased by his wife Maria Jose.