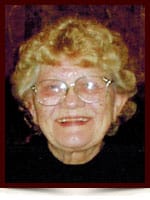 Lucille was born in Saskatoon, Saskatchewan, SK and was raised in Calgary, AB. Lucille was trained as a secretary but most of her career was in customer service. At one point, she worked as a millwright. Her last position was at the ABC Health Shop in Edmonton. Lucille was a beautiful and caring person and had a great love for life. She was well known for her sense of humor. Larry Kowalski, her husband of 60 years, was fond of her singing. Lucille will be greatly missed and be forever etched in our hearts.

We would like to thank the staff on 5D3 at the University Of Alberta Hospital, Edmonton for her care. We would also like to thank Southwest Homecare.