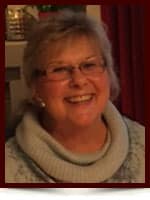 It is with saddened hearts that we share the peaceful passing of Carol Dayton (nee Hafner), with her beloved husband, Bill, at her side.

Carol was born in Summerland, B.C. and was an avid swimmer and gymnast in her younger years. On June 18, 1966, Carol married Bill Dayton. Bill’s career as a pilot kept Bill and Carol on the go, making homes in Abbotsford, Atlin, Whitehorse, Carstairs, White Rock, and finally Leduc. Bill and Carol were blessed with the birth of their son, Dan, on February 15, 1977.
Bill and Carol enjoyed many vacations around the world. They also treasured quiet times at Loon Lake and Garden Bay.

Carol had a zest for life and she loved dancing, panning for gold, fishing, playing Ramoli, floor curling, and playing bridge. She loved to watch The Voice and curling on television, especially when Brad Gushue won.

Carol greeted everyone with a smile and entertained with an open heart and a beautiful apron.
Carol is predeceased by her son, Dan, who passed away on January 10, 2005.

The family and friends wish to express their deep gratitude to the staff on Unit 51 at the Grey Nun’s Hospital for their great care and compassion.

In lieu of flowers, donations can be made to Telford House, the Leduc Food Bank or a charity of your choice, in Carol’s memory.