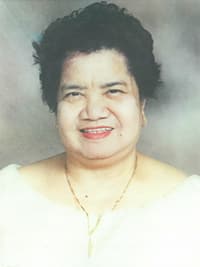 It is with great sadness that the family of Cristina Calub (Ogoy) DeJesus announces her passing on Sunday, June 3, 2018 at the age of 67.

Born January 19, 1951 in Bauang, La Union, Philippines; she is the fifth child of the late Maria (Calub) Ogoy, and Casimero Ogoy.

Cristina (also known as “Cristy” or “Tina”) was raised on a farm in Bauang. She had trained & graduated as a Registered Nurse in 1973 from the Dagupan City School of Nursing Polyclinic Hospital in the Philippines. Cristy immigrated to Edmonton, Alberta in 1975, becoming a Canadian citizen in 1979, where she ended up working as a nursing attendant at both the Eric Cormack Centre and St. Michael’s Extended Care facility until her retirement in 2007. Cristina had overcome many obstacles in life, but had also contended with multiple health issues in her later years.

Cristina will be remembered for many things, but most of all, for her love of her family and friends. Her inner strength and kind spirit will be felt for years to come.

The family wishes to thank all those who cared for her at the University of Alberta Hospital.