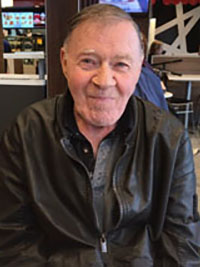 December 9, 2020 2 Condolences Print Obituary
It is with great sadness we announce the passing of our brother David on December 7, 2020 due to complications of covid 19.
David was born in Kelvington Sask. on April 20,1945 to James and Nicolena Hamill.  In his younger years he worked with our Dad both on and off the farm. When he was older he became  an “autobody mechanic”. In the early 1970’s he moved to Edmonton where he resided until his death.
David is survived by three daughters, Shelly (Craig) Jones, Michelle (Darrel) Ceslak, Stacy Hamill Anthony (Dennis) and one son, Doug ( Kim) Hamill as well as nine Grandchildren and six Great Grandchildren. He is also survived by three sisters, Elaine (Harold) Schultz, Sherell (Arnold) Leffler, Linda (Murray) Gates and two brothers, Jack (Gladys) Hamill, Bob (Brenda) Hamill and brother in-law Harry Fehr as well as many nieces  and nephews.
David was predeceased by his parents and two sisters,  Diane Wilkinson and Donna Fehr as well as two nieces, Kimberley and Lorelei Schultz.
The family would like to thank the staff at “Shepherds Care Home”, and the staff at the Royal Alex Hospital.
Due to the provincial restrictions, a private family internment will take place at a later date.