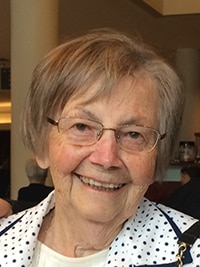 It is with great sadness that the family announces the peaceful passing of Ehrentraud (Trudy)  at the age of 89 years.

She was predeceased by her husband Edward in 1994, and survived by her three sister-in laws Mary, Nettie (Bob) and Annie, her three children Dianne, Greg (Leslie) and Gerry (Barb) and five grandchildren Bronson, Michael, Brett, Tia and Anika, as well as numerous nieces and nephews.

Ehrentraud (Trudy) was born in Czechoslovakia on September 5, 1928, to Sophie and Franz Drescher.  She had to leave her homeland with her parents and brother (Frank) in 1939 due to the Nazi takeover of the Sudetenland. The family came to Canada as refugees and settled on a homestead east of Loon Lake, Saskatchewan. After completing Grade 9 she worked in the Jeanotte’s General Store, took courses and worked in Saskatoon and then worked for International Harvester in St. Walburg. She married Ed Patychuk and they had three children. Ed’s work in construction took him away a lot but they made a family home in Edmonton. Trudy worked at many part time jobs. She was an active volunteer in her community league and in supporting the activities of her children, (figure skating, hockey, competitions and performances). She took care of her mother in her later years. She stayed active walking, doing her own yard work and snow shovelling well into her late 80s. She enjoyed music especially tenors. She was known for her creative handiwork, cooking and gardening and especially as a good neighbour and friend, always thinking of what she could do or give to others. Her gardens were glorious and bountiful. She was especially proud of and loved her five grandchildren. She was also very appreciative of the time her daughter Dianne spent with her during her last two years as she battled cancer and was happy spending her time at home with her beloved family and friends.

In lieu of flowers, memorial donations can be made to the Alberta Cancer Foundation ‘Ride to Conquer Cancer’ or the Edmonton ‘Alzheimer’s Face Off’  hockey tournament or ‘Lend A Paw Animal Rescue’  PO Box 852, Maidstone SK, S0M 1M0.