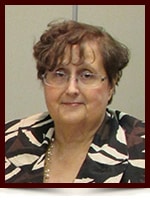 It is with great sadness that we announce the passing of our mother Elizabeth "Betty" Ann Wilson (née Moren).

She was also predeceased by her mother Vera and stepfather Joseph "Joe" Pierozinski and father Carl "Ed" Moren.

Our mother will be laid to rest in a private ceremony with her children and grandchildren at a later date.

In lieu of flowers , please make donations to the Salvation Army or the Royal Canadian Legion of Whitecourt, Alberta (Branch 44).