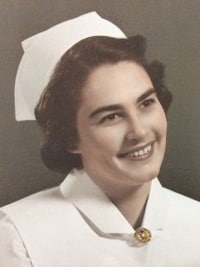 It is with heavy hearts that we announce the passing of Frances Doreen Karpa (nee Bray), age 87, of Edmonton Alberta, on Sunday May 24th. Frances is survived by her husband Fred Karpa, daughter Jane Karpa (Harold Shuster), son Nelson Karpa (Shelley Karpa) and grandchildren Jason, Jacqui and Mackenzie Karpa. Frances is also survived by her brother John Bray (Nora Bray).

Frances was adopted into the loving family of Ethel and Henry Bray. Frances grew up in Edmonton and completed her nursing degree at the top of her class in 1955 from the Royal Alexandra Hospital. She then went into community nursing, providing care to many rural locations in northern Alberta. Frances met Fred in Kinuso Alberta. They were married on January 1, 1957 and spent a total of 63 wonderful years together. After Frances and Fred were married, they moved to Edmonton and together started a family. In the early 1960’s they moved to Winnipeg and Frances continued her nursing career at the Deer Lodge Hospital, then at the Convalescent Nursing Home. Frances and Fred made many dear friends in Winnipeg, but in 1985, they retuned back to their roots in Edmonton. Frances then continued nursing at the Jasper Park Lodge. Following their retirement, Frances and Fred traveled extensively in Canada and beyond, and thoroughly enjoyed the many places visited and people they met.

Frances was a wonderful wife, mother and was a friend to many. Frances was a voracious reader and often spoke about meeting “new friends” in the many novels she enjoyed. She enjoyed cooking and baking, and was always up for trying new recipes. It was known that “Fran knew how to set a table”. Frances was outgoing, warm and compassionate to all. Frances touched the hearts and souls of everyone she met. We will miss her greatly.

Given the pandemic, the funeral service is postponed. An announcement of the service at All Saints will be provided at a later date. In lieu of flowers, donations can be made to All Saints Lutheran Church.

Glory be to God, forever and ever Amen.