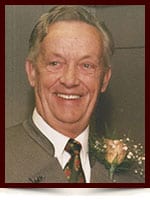 It is with great sadness that we announce the passing of a loving Husband, Father, Grandfather, Great Grandfather and Friend at 80 years of age. He was born in Berlin Germany in 1936 and migrated to Canada in 1954. It was in Kitimat B.C. that he met his true love in 1958. They were married in 1959 and then made their home in Edmonton A.B. Hans had a great career starting with R. Angus which later became Finning where he spent 41 years until his retirement. During his retirement his time was spent with family and friends; enjoying life while camping and attending social events. He is survived by his loving wife of 57 years Shirley; daughters Barbara (Dave), and Brenda (Rabih); his son Harry (Michelle); grandchildren Angela, Mandalyn, Kristin, and Shane (Jannesa); great grandson Jeremiah. He is pre-deceased by granddaughter Jamie. He will be remembered as a pillar amongst his friends and past colleagues, as a dedicated and devoted husband and father.

The world is dimmer without him here but Heaven is that much brighter.