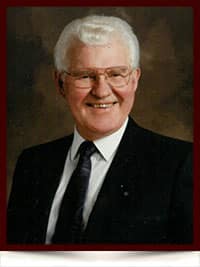 It is with sadness that we announce the passing of Henry Wiebe Neufeld on Saturday, March 11, 2017.  Henry was born on October 17, 1924 in Niverville, MB to parents Mary and Abraham where he was raised with 6 siblings, Ab, Olga, Herman, Wally, Jake and Dena.  Henry was predeceased by his sister, Olga and his brother, Herman.

Most of Henry's employment years were with Sun Life Assurance Co. of Canada.  He began his career in Creston, BC which took him to Kimberley, BC, Red Deer, AB, Davenport, Iowa, Prince George, BC and finally as a Branch Manager to Edmonton, AB.  He was also a dedicated Rotarian.

Henry's passion for carpentry was profound.  He enjoyed the creativity of working with wood.  He loved the challenge of design and building which he carried on throughout his life.

Many thanks to Dr. Bakshi and staff at the Royal Alexandra Hospital for your kindness and compassion.