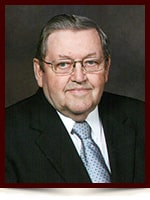 Howard passed away at home as he had wished after a valiant two-year fight with cancer. The cancer won, but it didn't quell his spirit. Howard was born in Luseland, SK to Janet and William Sim. He joined the military (Arty), serving 25 years. He was always proud to say "once a gunner, always a gunner".

On retirement he worked for the Edmonton Public School Board (Retired). Deciding he still wasn't ready to retire, he became Commissionaire working for the Edmonton Police Department. Finally, it was time to retire and he became member of the Alberta Genealogical Society (AGS), and volunteered weekly at the Provincial Archives. Much travel took place in the retirement years in Canada, U.S.A. and Europe.