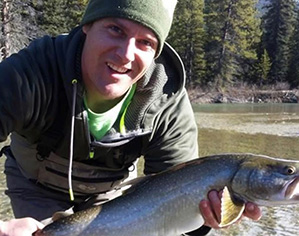 It is with heavy hearts that his family announce Jeffrey’s passing in hospital after a tragic fall in his home in Edmonton, AB. Jeff was born in Thunder Bay, ON, received an OAC diploma from Port Arthur Collegiate, a Certificate Welding Techniques and a Mechanical Engineering Technician Co-op Diploma from Confederation College before venturing forth to Alberta where he completed his Millwright-RED SEAL/diploma from Northern Alberta Institute of Technologies in Edmonton in 2010. Jeff did most of his millwright apprenticeship at Sunshine Village, Banff. Jeff was an employee of Umicore in Fort Saskatchewan, since 2014. He was also an active member of Millwrights Local 1460 and Unifor Local 530A, where he sat on the executive board.

Jeff loved the outdoors: gardening, fishing, camping, climbing, snowboarding and skiing. He was also a talented artist who dabbled in many mediums. One of his latest was fly tying which he became very skilled at. When not working, Jeff could be found in one of his favourite camping and fishing spots, enjoying the company of friends and family.

Cremation has taken place in Edmonton. There will be no gathering at this time, but a Celebration of Life in Thunder Bay will take place at a later date when we can hug once again.

In lieu of flowers please donate to a charity of your choice.