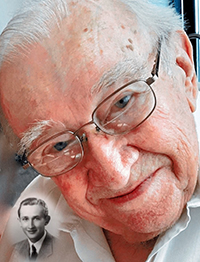 It is with great sadness that we announce the death of John Joseph Lipinski. He died in Edmonton, Alberta, Canada on July 3, 2020, at the age of 95, following a fall in January from which he never recovered. We will miss him.

John was born in Calgary, Alberta on August 7, 1924, the only child of Polish immigrant parents Franciszek (Frank) Lipinski and Eufrozynia (Franciszka/Frances) Lipinska. He grew up in Gartly (then a small community in southern Alberta near Drumheller) and attended Drumheller Composite High School. In 1942 John moved to Edmonton to attend the University of Alberta. He graduated with a B.Sc. in 1944 and a Medical Degree in 1948, followed by one year of post-graduate studies. In 1949 John married Mary, who also grew up in the Drumheller area.

John was a physician and surgeon for 20 years (1949-1969), with a practice on 118th Avenue in Edmonton. For 16 years (1969-1985), John was the Medical Director of the Edmonton General Hospital. After his retirement, he and Mary spent several winters in Mesa, Arizona. Throughout his life John enjoyed music (playing the violin), drawing and painting, stamp collecting, and antique hunting with Mary.

We would like to express deep gratitude for the compassionate care John received from the dedicated staff at the Mel Miller Palliative Care Unit in the Edmonton General Community Care Centre. This was especially appreciated during the COVID-19 pandemic.

Given the COVID-19 pandemic, there will be a small private family burial. Donations in John’s memory may be made to iHuman Youth Society (a non-profit organization in Edmonton, Alberta that engages marginalized youth creatively using the arts) or to a charity of your choice.