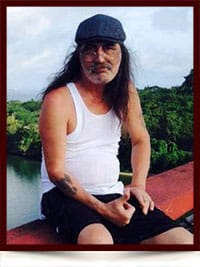 It is with great sadness to announce the sudden passing of their loving Father Kenneth Orville McAmmond on 12 April 2017 in Edmonton, AB. He will be sadly missed by his 4 children; Amber (Tony), Kenny (Tiffany), Sarah, Ainsley and 5 grandchildren; Eric, Ryan, Jacob, Grace, and Kenzy.

He was born on, 13 April 1959, in Winnipeg MB, predecessed by his Father Orville McAmmond, Mother Theresa Savignac and Brother Robert McAmmond

He served in the Royal Canadian Army for 3 years in the early 1970's where he was the youngest in Canada to received his basic parachute course.

He work as a pressman for 30 years, he was very proud of his job, and loved speaking about it to anyone that would listen. He was a hard working man who wanted better for his children than what he had. He was very active in his children's activities as they were growing up. Where he would always volunteer as a coach.

The cremation has taken place and a private service will be held at a later date.