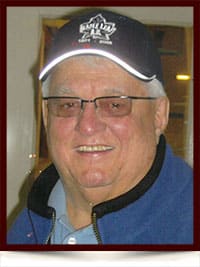 Jake was born in Willingdon, Alberta, attended school in Beverly, Eastglen Composite High School & NAIT. He was a dedicated employee of Ed Tel for 35 years and had the privilege of developing his career into the management ranks. He enjoyed many aspects of volunteerism which was evident in his lifelong dedication to the Maple Leaf Athletic Club as a hockey coach and Alumni life member.

He was appointed as a member of the Board of Governors for NAIT and was honoured to have had his son in law and grandsons also as NAIT graduates. Lawrence became a charter member of the Al Shamal Shriners and was an active member of the Greeters Unit. He was also involved with the North East Zone, the Beverly Heights Community League and the Hockey Edmonton Alumni and Northlands. As a coach he was proud that his influence assisted these young men in achieving their life goals.

Thank you to everyone who reached out by personal visits or phone calls to Jake. It brought joy to him to reflect on friendships and memories.

To honor Jake and his love for minor hockey we ask that you wear your favorite hockey jersey to his Celebration of Life.