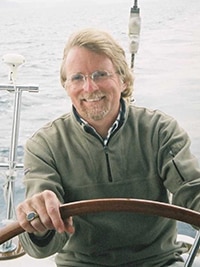 If family functions like a mobile, then Leigh surely was – and is – very near the centre of this large Gower/Frain/Stafford-Mayer family mobile that spans continents. The turbulence we feel in his sudden, wrenching passing at age 62 is profound. Leigh left this life surrounded by loving family and friends on October 29 at the University of Alberta Hospital in Edmonton following complications from a stroke.

Born in Durban, South Africa, on July 13, 1956, to Moonyeen Stafford-Mayer and Beverly Gower, he was a chubby ginger-haired baby. At age 3, he came with his mother to Canada to join his grandparents, Dr. George and Denise Stafford-Mayer, and his Canadian family who had emigrated from South Africa two years earlier. Leigh made lifelong friends in Innisfail, where his love of learning, acting, and outdoor activities was kindled.

In 1991, Leigh and Barbara relocated with baby Gwendolen to Whitehorse where Leigh’s focus was mainly criminal-defence law. Soon afterward, son Dylan was born. Leigh loved the North, and especially In the early years of his legal practice, he frequently traveled by small plane to the tiny communities of NWT and the Yukon to defend accused persons in “circuit
courts”.

Following in the footsteps of his artistic and theatrical family, Leigh developed a love for the stage as a young boy, and continued his engagement in local theatre as an adult. He acted in countless plays. Some of his key roles include Falstaff in The Merry Wives of Windsor ,Stanley in A Streetcar Named Desire, Hamlet in the play of the same name, the King in Macbeth, and leading roles in productions such as True West , A Comedy of Errors, The Tempest, Much Ado about Nothing, Jitters , Going Native , Respublica , Sisters, and many more.

If you have been privileged enough to witness Leigh’s accents and imitations, you’ll know how accurate and hilarious he was. He particularly loved speaking in Welsh, Scottish, and English accents. When the children were small, he read them the entire Harry Potter series in an assortment of British accents.

Leigh was an avid outdoorsman who loved hiking, backpacking, camping, kayaking, canoeing, skiing and much more. Almost every weekend in the winter months, you could find Barbara and Leigh either at Mt Sima getting in early runs in as the sun rose, or cross-country skiing on the beautiful trails around Whitehorse.

Leigh was dedicated to keeping fit and healthy. He earned a second-degree black belt in karate; he went for a 5k run every lunch-hour rain or shine; and he worked-out with weights every day after work.

In 2003, Leigh received a momentous phone call from the Prime Minister’s office, offering him a judgeship in the Yukon Supreme Court. Leigh called this appointment “the miracle of the judgeship,” and his abiding respect for the rule of law is evident in the accolades which have poured in from the legal community after his death.

Leigh was a deeply spiritual man. He meditated and prayed daily, he actively sought out spiritual teachers, and he initiated intimate conversations that reflected his quest for understanding of the challenges, rewards and mysteries of life, death, faith, and the many facets of love.

Leigh and Barbara loved traveling with their children to visit their far-flung family, forging meaningful relationships with loved ones throughout Canada as well as in the UK, South Africa, and Australia.

He rode his Harley often, his long red hair flowing; Leigh’s motorcycle trips with his buddies on the annual “Vitamin B Tour” have become truly mythological. Tales of these trips rival the spirit of Robert Service, whose poem The Spell of the Yukon Leigh would recite on well-oiled evenings under the stars and around campfires.

Like his father Beverly, Leigh was dedicated to his Welsh heritage. He wore the Celtic cross proudly; he loved the Welsh flag, culture, language and history. He also connected with his grandparents’ French heritage through his disciplined learning of French, a commitment which involved daily study, weekly meetings with a tutor, and annual immersion courses in Quebec.

Leigh was a dancer. The family has fond memories of his “how low can you go” limbo exploits; his “spaghetti legs” performances on the dancefloor; and his “Gower Shuffle” as the evenings progressed.

Leigh and his match and mate, Barbara, have been the catalyst that brought this sprawling family together. In the summer of 2013, Leigh and Barbara hosted an epic four-day family camping trip in the Yukon and Alaska to celebrate their 25 wedding anniversary. In a campground in Haines, Alaska, they appeared from their camper in their full wedding-regalia, while two dozen adults and children feasted and danced the night away under the midnight sun. This momentous event has now spawned five years of family reunions, which we fondly call “Famstock".

Leigh requested a natural, “green” burial. He would be so pleased that we found a quiet and beautiful countryside cemetery, close to his hometown of Innisfail and in one of his favourite regions of Alberta. In a lovely ceremony in the midst of family and close friends, we buried Leigh at the Ricinus Cemetery on November 10. We sang Taizé melodies as we each placed a message, a drawing, or an article of nature on his casket as a symbol of our love for him.

Leigh, the mobile of family and friends here today and all over the world is vibrating. We salute you, Leigh… Husband, father, grandfather, brother, uncle, cousin, friend, judge, pilgrim. You inspire us to be the best possible human beings we can strive to be. Safe travels, Beloved.

Suggestions
for Donations
in Leigh’s memory:
The Nakai Theatre in Whitehorse, YT https://nakaitheatre.com
The Center for Contemplation and Action in Albuquerque, NM
https://cac.org
(Or any charity of your choosing.)

Memorial Service:
January 5
5:00 - 10:00 pm
Kwanlin Dun Cultural Centre
Following the service, there will be delicious refreshments and a cash bar.

Leigh loved to “get-down and dance”, and requested that there be some good rockin’ and rollin’ at his Memorial Service. If you prefer to have quiet conversations, there will be space provided for this.