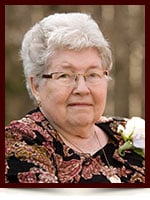 Surrounded by her loving family, Leona Wardrop of Edmonton passed away peacefully on March 4, 2016 at the age of 90 years.

She is survived by her loving children: Tannis (Robin) Vogelesang, Kerry (Johanna) Wardrop and daughter-in-law Janet Wardrop; five grandchildren: Todd, Marran (John Paul), Scott (Val), Kimberly (Andrew), Laurie; and one great-granddaughter: Rylee. Leona was predeceased by her husband, John (Jack) in 2004 and her son, David in 2013.

Special thanks to all of Leona's caregivers at the Jubilee Lodge Nursing Home for the exceptional care they provided during the eight years she was a resident.

In lieu of flowers, memorial donations may be made directly to the Jubilee Lodge Nursing Home, 10333 - 76 Street, Edmonton, AB T6A 3A8 or the Heart & Stroke Foundation.