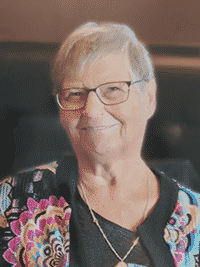 Pat was born in Saskatoon Saskatchewan to Anton and Clara (Peters) van Nes on April 17, 1943. She was the third of four children. Pat will forever be remembered for her gentle caring nature and the kind smile she had for everyone.

Pat grew up helping in her parent’s store in Hepburn Saskatchewan. After high school Pat attended Bethany Bible College in her hometown then continued her studies at The Mennonite Brethren Bible College in Winnipeg. Once her studies were complete in 1967 Pat moved back to Saskatchewan and began working at the Royal Bank in Saskatoon. This led her to the Royal Bank in Hay River North West Territories where she met her husband Gilbert when he went into the bank for a roll of pennies. They were married later that year on August 16, 1974. In 1976 they adopted their son David and moved to Lloydminster. A few years later they completed their family with the birth of their daughter Lisa in 1979.

Pat was a stay home mom for many years while the kids were little, she met many neighbors and friends in Marwayne while selling Avon and Tupperware. Weekends were spent at the hockey arena cheering on David’s team. During the week it was chauffeuring kids to hockey practice, figure skating, violin lessons, girl guides, ringette and AWANAs. Pat was director for the AWANA club for several years she also enjoyed singing in the church choir at the Alliance church. If that didn’t keep her busy enough Pat eventually returned to school completing her Accounting Diploma at Reeve’s Business College.

When the family moved to St. Paul in 1991, she went to work in the motor vehicles registries office where she worked for several years. Pat continued working in a registries office when they moved to Bonnyville in 1998. When Pat wasn’t working, she could often be found with a book in her hand or crocheting a blanket for a loved one, or the many other items she loved to create. Pat took on caring for her mother Clara when they had her move into their home in Bonnyville. You would often see the two sitting and crocheting together. When her mother was moved to continuing care 5 years later Pat would go daily to read to her mother and sit with her while she ate.

After her mother passed Pat decided it was time to move to Beaumont to be closer to the grandchildren who she adored spending time with. She was such a proud grandmother and even more excited when she found out she was going to be a great-grandmother. She loved snuggling her great-grandson when he would visit.

Internment
Cremation to follow the service with internment to be held at a later date.