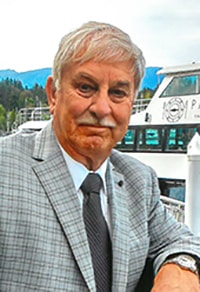 The "life and story of Richard" began on Tuesday, August 15, 1939 in Yorkton, Saskatchewan. Richard was the older of two boys born into the Joseph Gendur family. He spent his early childhood years on the family homestead south of Yorkton, in the hamlet of Otthon, where he attended school for most of his education. At 16 years of age, Richard's father was transferred to Gimli , Manitoba as the Grain Elevator Agent for that area and so another adventure began for the family.

Following high school, Richard began working for North American Lumber in Winnipeg Beach, and then transferred to Pine Falls in his second year. It was here he met his first wife. They moved to the City of Winnipeg, raising their two children Dawna and Greg. Richard then worked at Winnipeg Supply as a purchaser. It was in Winnipeg that he was then hired on at Weldwood and continued to work there until 1978 at which time he was transferred to the Edmonton Branch. Another adventure unfolded!

It was in Edmonton that he met Margaret, his future wife and her family. Richard and Margaret were married in 1982, and he found himself with two new teenage daughters, Nicole and Carrie-Lynn. Life with the new gang was always an adventure, and provided little down time, but he was always up for the challenge.

As good as life was, it became a whole new experience upon the birth of his first Grand-daughter, Olivia, his Grandson Zach, and his youngest Granddaughter Julia. These babies, now amazing young adults were his love and joy. If there was ever to be a contest for the "World's Best Grandpa", he would surely place first.

Although Richard officially retired at the age of 65 and took a brief hiatus doing many extensive renovations to the home, he returned to the working world and joined the Budget team as a shuttle driver. The exposure to the younger folks in the office kept him up to speed with all the new trends in the world. He enjoyed meeting and conversing with his customers and was well respected by those he worked with. He continued on with Budget until April 2018.

In addition to working, there was a little 'work-out' time that became a regular daily event once Richard retired where he took full advantage of his Grant MacEwan Sports Membership, always returning home with coffee for two".

Richard was a homebody for the most part, but he did love his Monday afternoons on the golf course with his buddies at Twin Willows golf course. In his younger years, he had a love of cars and in particular, enjoyed working on and racing sports cars with his friends. Before the high tech of vehicles came into vogue, Richard would take on any auto repair challenge and complete it without hesitation. He was a very capable man in many ways, and would take on projects most people would hire a professional for. He could build a home, upgrade and renovate with confidence. He built a shed in the back yard about 15 years ago, and the neighbours used to tease him, saying he had built the roof as if it was a mini barn - sure to withstand any disaster!

Summer holidays usually teased him back to Gimli, where his Mother continued to reside until 2011, and his daughter Dawna, not too far away from Gimli, until 2018. The road trips home to Gimli and other destinations were never a chore, but an adventure. He loved having no schedule or deadline to adhere to and we often went the back-country roads just for a more relaxed and interesting trip. He could always handle the obstacles that popped up along the way, such as car breakdowns or the never ending No Vacancy' signs as dusk quickly came upon us at the end of a long day. He made the best of the situation at hand as it presented itself and if there was a restaurant near-by or munchies at hand, that was even better!

Football and Hockey games were always a delight for him if Winnipeg was playing Edmonton as his daughter Dawna, from the Winnipeg area, would always challenge him throughout the game via phone-calls.

What our Richard will be remembered for by his entire family is how he supported the many activities of each and every one of us, whether it was a soccer game, dance recital, Scout event, drama activity, flying with his grandson, or the many musical concerts he attended to support his wife. He supported all of us in many different ways, whether near or far, in his own quiet way. He really asked nothing of us but we asked a good deal of him. He was a gentle soul, slow to anger, and quick to forgive.

To have had him in our lives has been a treasure, to have him leave us on June 16, 2019 has been heart-breaking, but we trust that he is at peace, and that his journey, well travelled, will bring him rewards he is so deserving of.

Good-bye dear one, we love you, and will always remember you.