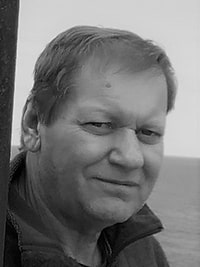 It is with great sadness that the family of Bob Clark share his sudden passing on June 4, 2018. Bob was born March 28, 1957 in Winnipeg, Manitoba where he lived until 1994 when he was transferred by his career employer, Ford Motor Company & he chose St Albert as a new home. He retired in 2011 and enjoyed several years “taking it easy” with family adventures, casual work, golfing, dog sitting & watching lots of TV reruns. Sports were his passion and #1 was hockey. He also enjoyed travelling & geocaching.

Bob is survived by his loving wife of 32 years, Joanell and two favourite sons Ty (Caity) and Troy. He also leaves behind his sister Terry and his entire in- law family; Sharon & Ron, Anne & Edward, Tim & Laurie, Bob & Lily, Lori & Arlin. He will also be missed by many nieces, nephews & their children and many great friends.

He was predeceased by his parents, Captain James & Gloria Clark and his sister Vicky & her husband Bill & brother in law Jack as well as his parents-in-law Cornie & Tina Loewen.

A casual celebration of Bob’s life will be held at High Park Community League on Sunday, June 10 at 1pm and we request you wear white so we can give Bob one more “Winnipeg Whiteout” to honour his love of the game

Memorial donations may be made to the Heart & Stroke foundation or to a charity of your choice.