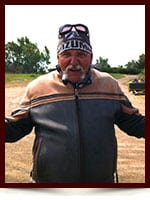 Tragically on August 3, 2013 Roberto C. Gaspar of Edmonton passed away from a motorcycle accident in Rapid City, SD. He was 56 years old.