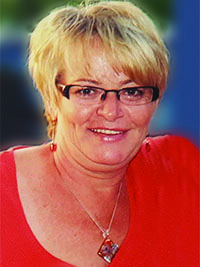 It is with heavy hearts, we regret to announce the passing of a loving wife, mother, nanny, sister, and aunt.

Robin Barron passed away peacefully in her home due to heart failure on September 1st, 2018 with her loving husband, Gerald (Jerry) Mader, by her side.

Robin was born in North Sydney on January 4, 1960. She was born to her parents Cornelius (Nick) and Jean Barron.

Robin was extremely dedicated to her family, who she truly cherished. She opened her heart and home to many over the years, but it was noticeable that her grandchildren were the true sparkle in her eyes.

Robin was one of the kindest, funniest people you could ever meet. Her kind heart, contagious laugh, and joking nature would always leave you with a joyous feeling.

Robin was predeceased by: her parents, Nick and Jean Barron and recently, her brother John (Connie) Barron.

A Later funeral mass will be celebrated at 10:00 am, Friday October 12 at St. Joseph Roman Catholic Church in North Sydney, Nova Scotia. Family flowers only.  Followed by a tea and coffee and a graveside service at Holy Cross cemetery North Sydney where she will be laid to rest.

Donations may be made in memory of Robin L. Barron to the Edmonton Heart and Stroke foundation or to a charity of your choice.