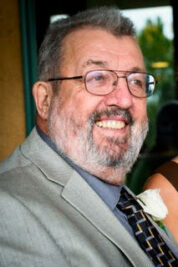 Ronald Bryan(“Ron”)Kisslinger, age 75, formerly of Edmonton, Alberta, passed away Monday November 8, 2021. He was born in Provost, Alberta on February 3, 1946 and lived on his family farm. As a teenager, Ron worked at the Provost Auction Mart and helped on the family farm where he developed a strong work ethic. He met and married Donna Reinhart on June 4, 1966 and they had two sons Darney and Chad. Ron later started the Provost Locker Plant where he processed meat and stored it.

This entrepreneurial spirit continued as he moved to Saskatchewan and started a gas station convenience store called P. R. Service in LaLoche in August of 1991. He also pursued his lifelong passion of hunting by carving out an airstrip for only a Piper Cub airplane for an outfitting /bear hunting service at Kimowin Lake and then LaLoche and traveling the world hunting different animals.

Ron was a life long sports enthusiast and served as the equipment manager for the Provost Senior Hockey team and coached his boys in hockey. He also had a passion for playing poker and was a well known figure at Edmonton’s poker tables. Ron had his pilot's license and flew recreationally for many years. He retired in 2010 but did not slow down much but took the time to enjoy his beloved grandchildren. He always had time to watch their sporting events or encourage them in their pursuits.

He is preceded in death by his parents Mike and Yvette Kisslinger. He is survived by his sister Delores West, his son Darney and wife Carla and 4 grandchildren; Cody, Dylan, Ryan and Lana and numerous great grandchildren, son Chad and his wife Heather and 5 grandchildren, Brett, Karleigh (Rylan), Levi, Ami and Lochlan and great grandchild Amara. The family would like to express their sincerest thanks to the staff at the University of Alberta Hospital in Edmonton for all their care and concern. If desired, friends can make memorial contributions to The Cancer society. Memorial services will be held at the Sylvan Lake Legion on December 10, 2021 from 1-3.