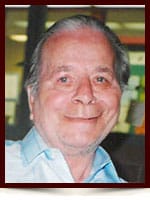 On April 9, 2015 Mr. Salvatore Scivoletto passed away peacefully at the age of 79 years.

Left to cherish his memory are his three brothers: Guiseppe, Giovanni (Jackie) and Vincenzo; his sister Concettina; his grand-daughter Theresa as well as numerous nieces, nephews and many dear friends.

He was predeceased by his wife Ruth, his daughter Gina, his brother-in-law Francesco and his sister-in-law Guiseppina.