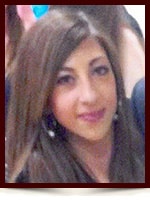 It is with heavy hearts and profound sadness that the family of Sophia Syskakis announce her passing on March 21, 2014 at the age of 15 years.

Left to cherish her memory is her father Chris, her mother Marisa (Tomasz); her brother Alexander; grandparents Vittorio and Rita DeLuca as well as numerous relatives and dear friends. She was predeceased by her grandparents Costandino and Zoy Syskakis.