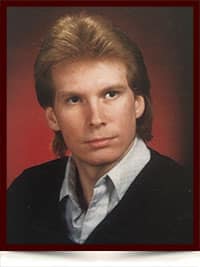 Steve passed away unexpectedly on August 5, 2016 in Edmonton, Alberta at the young age of 45.  He was pre deceased by his father and mentor, Henry Vilhelm Jensen, on August 19, 2001.

Steve's passing has broken the hearts of his mother, Lois, brothers Allen and Darren, sister Valerie, nephew Keith, nieces Ashley and Brittany and many other family and friends.

The family will be having a private celebration of Steven's life.