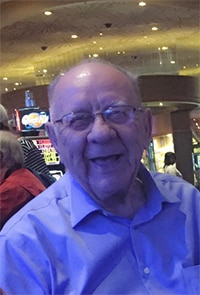 It is with great sorrow and sadness that we announce the passing of Mr. Fred Sydora of Edmonton Alberta who passed away at the age of 87, on March 30th 2019.

Dad will be missed by his family. He is survived by his son, Brian Sydora (Maureen wife of Brian) and his daughter, Christine (partner Mike), his sister, Gloria Zyluk in Winnipeg.  Our dad leaves behind his three granddaughters Lisa (John), Jessica (Nick) and Rachel (Barry) and seven great grandchildren.

Dad is predeceased by his parents Steve and Rose, wife Stephanie, brother John, and sister Mary.

Funeral arrangements have been made for a service on Friday at 11 am at St. Michael’s cemetery in Edmonton.

Donations can be made to the Kidney Foundation of which Fred was a dialysis patient for 8 years.