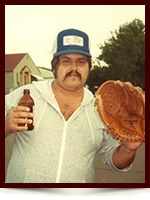 Forever In Our Hearts

He was predeceased by his father Nick on February 5, 1988.