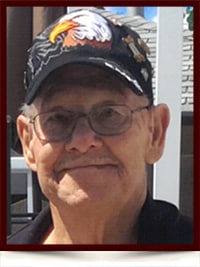 Wilf is predeceased by his parents Irma and Ejner, sister Joy, brothers Richard and Gerald.