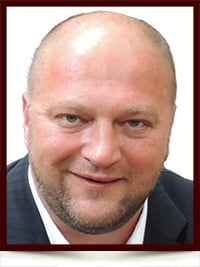 He was predeceased by his father Bohdan, uncles and aunts: Mike and Mary; Peter and Stefania. He will also be missed by Kimberlie's family: sister Kellie (Mike), brother Keith (Gail), Kimberlie's son Travis (Natalie) and grandchildren Quinn and Declan, nephew Sean and niece Sarah and Kimberlie's father Bruce.

In lieu of flowers, donations may be made to the Heart and Stroke Foundation.