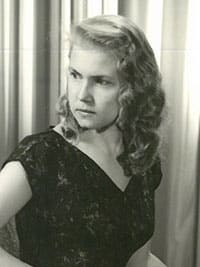 It is with heartfelt sadness that we announce the peaceful passing of Alfriede Berwald on November 16, 2019, at the age of 82 years with her family by her side.

Predeceased by her husband Bruno and parents Edmund and Johanna, Alfriede will be greatly missed by her daughters Gayl and Cam (Neil Turnbull) and twin grandchildren Teagan and Kyle. Also left to mourn is her sister Ida, and brothers Arnold and Reinhard as well as nieces, nephews and extended family.

Alfriede was born on October 10, 1937, in Buckowa, Germany, and immigrated to Alberta with her parents and siblings in 1955 to start a new life. Alfriede's first job in Edmonton was working at the Misericordia Hospital's kitchen. After her marriage, she followed her husband moving between construction sites in Fort MacMurray, Timmins, and Brazeau Dam. With two young daughters to care for, Bruno and Alfriede began working even harder to secure a good life for their growing family. In a giant leap of faith, they invested their hard-earned money in building an apartment and managed it until their retirement.

Alfriede always had a life-long desire to see the world and fortunately she was able to achieve part of her dream. Some of her most memorable trips included: Hawaii, Asia, the South Pacific, Greece, Turkey, the Caribbean, and both coasts of the United States.

Alfriede was well known for her kindness, gentleness, empathy and generosity. Even her name in German reflects the hope that one day, "Everyone can be happy and content". To her daughters she was truly the best Mom and showed her love everyday by the sacrifices she made to ensure they were afforded every opportunity. To her grandchildren, Alfriede was "Die beste Oma in der Welt". She treasured each moment spent with them. We will cherish her memory in our hearts forever.

The family would like to extend their sincere appreciation to the wonderful staff at South Terrace Continuing Care Centre for the exceptional care and compassion they showed to our mother over the last few years.