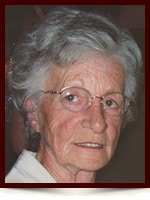 On Wednesday March 15, 2017 Ann Sapieha of Edmonton passed away at the age of 81 years.

She was a blessed mother to four children: Vivian and her children: Ryan, Nicole (Nick) and Sean (Georgia) of Australia;  Mel (Wendy) Sapieha and their daughter Christine; Sharon (Tim) Latimer and their children: Jolene of Los Angeles, Jordan, Jillienne, Jesse and step-grandson TJ (Zoe) of Philippines and their two children and Darrell (Charlene) Sapieha; her special great-grandson Lukas Dersch; her siblings: Jean, Elsie, Marion (Bob) and Phyllis (Jerry); her special puppy Fraser as well as many relatives and dear friends.

She was predeceased by her husband Walter, her parents and five siblings.