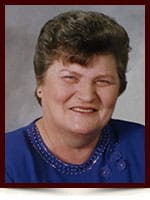 It is with much sadness we announce the passing of our loving Mom and Baba, Anne Manko on January 14, 2016 at the age of 80.

Anne was born on August 11, 1935 in Mayfair, Saskatchewan.  She grew up on the Fred Nasewich Homestead in the Krydor – Blaine Lake area.

While working as a switchboard operator she was set up on a blind date with a young man named Peter Manko.  On October 29, 1955 they were married and resided in Saskatoon for the next 2 years.  They moved to Edmonton in 1958 where they were blessed with three children, Dale (1960), Linda (1964) and Valerie (1967).

Anne was an employee with a number of food service businesses and later she and Peter were self-employed in the Bingo industry.  She volunteered with many groups and was well known for the food she made for the banquets for the Chargers Football Club.  After Peter was diagnosed with Lou Gehrig’s disease she was an active volunteer in the Edmonton chapter.

Anne worked hard at everything she did.  She was a perfectionist in anything she made with her hands.  She loved to cook, sew quilts, crochet, knit, draw, paint, and made beautiful Ukrainian Easter eggs in many sizes.  She enjoyed entertaining, especially her family.  It was important that there was always enough food for all who dropped in.  She was active until the very end, living alone and cooking her own meals.

A Celebration of Life will be held at Trinity Funeral Home, 10530-116 Street on Saturday, January 23, 2016 at 2 p.m.   As per her wishes, cremation has taken place.   In lieu of flowers, donations can be made to the Edmonton Food Bank.