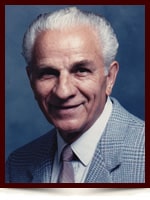 It is with sadness that we announce the passing of Christos (Chris) Petropoulos on January 17, 2012 at the age of 91 years.
Chris was born in Skotini, Argos, Greece on December 24, 1920. He served in the Greek Army, part of the resistance of WW2. He emigrated to Montreal, Canada in 1951 where he met his loving wife, Theo, of 58 years, who survives him. He is also survived by his children: Katie (Kostas) Priftis of Greece, George Petropoulos and Alexis (Dr. Luis) Baptista; seven grandchildren: Renata, Andreas and Alex Priftis of Greece, Penelopie, Christina, Chris and Billy Petropoulos; two great-grandchildren, Zachary and Alexander, and nephew Peter Petropoulos; two sisters in Greece as well as other relatives and dear friends.