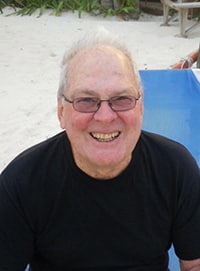 It is with great sadness that we announce the peaceful passing of Clare Armstrong Shier on Wednesday, June 26, 2019.

He was welcomed into the arms of his parents, Clifford and Phyllis Shier, on June 24, 1936 and spent his early years in Colonsay, Saskatchewan. He moved with his parents to Saskatoon where he attended Caswell Public School and Bedford Road Collegiate. It was here he met the love of his life, Gloria Sweet, whom he later married while attending the University of Saskatchewan where he graduated with a Degree in Agriculture.

He began his career in Ottawa, Ontario and later, with his young family, moved to Sherwood Park, Alberta in 1968.  At that time, Clare accepted a position at the University of Alberta where he remained until his retirement in 1991.

Clare was a passionate gardener, skilled financial investor, an avid sports fan, a lover of Springer Spaniel dogs, and as well, he enjoyed many summers at his family cabin in the Okanagan. His sense of humour, quick wit, love of laughter, and youthful zest for life will always be remembered.

Clare is predeceased in death by his loving wife, Gloria, and his parents, Clifford and Phyllis. He is survived by his caring children, Cheryl (Bruce), Randy, and Cathy; grandchildren, and great grandchildren.

He was especially proud of his five grandchildren, Rebecca, April (Brett), Scott (Megan), Jillian (Sean), and Christie (Stephen); and his two great grandchildren, Kate and Molly. It is with deep regret that he is no longer able to be a part of their accomplishments and successes in the future.

In accordance with Clare’s wishes, a private family service has been planned to celebrate his life. His friends are encouraged to celebrate Clare in a way that is meaningful to them.

In lieu of flowers, donations may be made to the SPCA in Clare’s memory if you so choose.

He will be sadly missed and forever treasured.