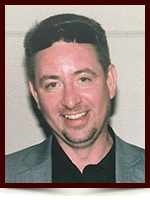 It is with heavy hearts that we say farewell to our youngest brother Daniel (Danny) James Sutherland.

He is free of pain from the cancer that took him from us.

We will miss everything of Danny. His smile, humour, his boldness and his straightforwardness.

Danny loved his dog and cat, Sheba and Billy. They were his life.

Danny is survived by his four brothers: Lawrence (Dilys), Michael, David, Jack; his sister Agnes (Paul); nine nieces and nephews; Margaret, Christopher (Tonia), Shannah (Fiance’ Gary), Mariah, Sabrina, Emily, Wendy, Joseph and James as well as many aunts, uncles and numerous cousins. He is also survived by his many friends, the boys from the hood whom he loved and respected greatly. You were his brothers.

Danny was predeceased by his parents, Rose and Lawrence Sutherland.