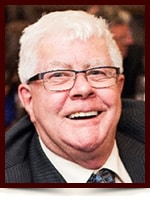 It is with great sadness that the family of Danny Hubenig announce his passing on August 30, 2016 at the age of 76 years.

Danny will also be greatly missed and remembered by his sisters Lynne (Brian), Donna (Roger), Mary Lee (Patrick), and Gayle (Cliff), and brothers Michael (Bernice), and Rick, and his as well as several nieces, nephews, extended family and dear friends.

He was predeceased by his parents, Michael & Blanche Hubenig, and two nephews.

As per Danny’s wish he has been cremated.

In lieu of flowers, please make donations to the Canadian Cancer Society