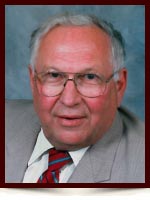 It is with great sadness we announce the passing of Donald Gauf. Don is survived by his loving wife, Joan (nee Smith); two children, Jeffrey (Barbara) Gauf, Nadine Gauf; and adoring grandchild, Macgregor Gauf. Don was the son of the late Jacob (Jack) and Adella Gauf. He was predeceased by his sister Jennie (Thomlinson) and brothers, William (Bill), Ernest (Ernie), and Robert (Bob).

Born in Edmonton, he grew-up in Fort Saskatchewan and started his dairy business under the Bar 4 Ranch.  Always a business man, his life took a change and he went on to enjoy many years as a partner and fleet/truck manager of Waterloo Mercury.

Don played as a defenseman on the Edmonton Mercurys hockey team that won the World Ice Hockey championship in London in 1950 and the Olympic Gold Medal in ice hockey in Oslo in 1952. Don remained active his entire life; in the early years with baseball and hockey and later with curling, skating and golf. He was a member of the Edmonton Country Club for many years.

He and Joan shared many family holidays in Hawaii where Don had the pleasure acting as an Honorary Grand Marshall at the Hawaiian Open. He took great enjoyment in the company of his family, especially his only granddaughter. Don developed many life-long friends not only through sports and business but also with the Freemasons, Empire Lodge No. 63 and will be sorely missed.

The family would like to express their appreciation to the doctors, nurses and staff of the Edmonton General Hospital for the care given to Don.