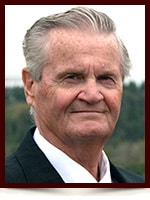 He is survived by his wife Susan of 48 years, his daughter Lisa, son Stephen (daughter-in-law Jenna), grandson Matthew, granddaughter Olivia; siblings, Robert (sister-in-law Dianne) June (brother-in-law Jan) and Lynne as well as many nieces and nephews.

He is predeceased by his parents, Robert and Eva. Doug was the light in our lives and he will be dearly missed.