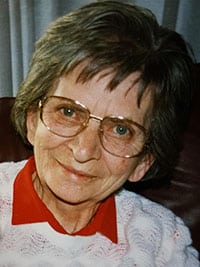 On Sunday Edna passed away at the age of 94 after a five year struggle with Dementia. She was most recently of Edmonton but lived the majority of her life near Westlock, Alberta. Edna was ill for a long time and now rests in peace. She was predeceased by her father, mother and siblings and is survived by her 6 children and 12 grandchildren.

I remember her as an amazing role model and a very caring mom who always wanted to help anyone in need. Many of those she helped also ended up calling her mom so this name became a sincere sign of respect. She grew up in the Canadian prairie depression period and then gained amazing experiences working through the war years. This drove her to raise her family to understand the meaning of strength, hard work and resilience and her “never give up attitude” is an inspiration. Edna had a great talent for crafts, organization and baking and cared deeply for her family and friends.

At her request no formal service will be held. Cremation has taken place and a simple celebration of life gathering has been set for Saturday March 2, at the Kingsway Legion, from 1:00 pm – 5:00 pm. 14339 – 50 Street Edmonton https://kingswaylegion.ca/

May she rest and be forever remembered.

Memorial Donations
In her memory: if during your donation efforts you feel inclined to support the Royal Canadian Legion / Veterans Group or the Edmonton WINhouse / women's shelter, it will be appreciated as both these charities were close to Edna’s heart.