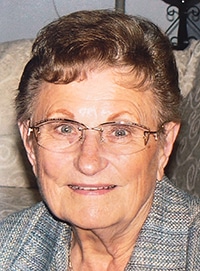 Eleanor was born on a farm at Holden Alberta, a town 65 miles east of Edmonton.  She was the oldest of four children born to Nick and Mary Pasnak.  In her earlier years she finished school and went to work in Edmonton.  She worked at the Paris Café as a waitress and met a friend Nancy who also worked there.  They decided to move to Vancouver and both were working at the Oxford Café, waitressing.  One night at a dance she met Steve Meleck (originally from Winnipeg) who was in the Army stationed in Vancouver. They met in February and later that year were married October 20, 1944. When her husband was discharged from the Army they moved to a dairy farm north of Edmonton.  They had three children.  In 1956 they moved into the City of Edmonton where Mom worked at the Silk Hat Restaurant as a waitress which she loved and was there for many years until she retired in 1990.  Mom was adored and loved by all her customers.  Mom loved to cook, bake, and was the most immaculate house keeper. She thoroughly enjoyed yard work and caring for her flowers in the summer.  She also enjoyed dancing, fishing, camping, playing bingo, cards and volunteering at the Church making cabbage rolls and pyrogies.

As per Eleanor’s wishes, cremation will take place and no formal service will be held or celebration of life.

Her family gives a heartfelt thank you to Dr. D Fields and express their sincere gratitude to all the amazing and wonderful staff on the third floor at the Good Samaritan Southgate Care Centre that made the end of Mom’s journey with dementia easier.